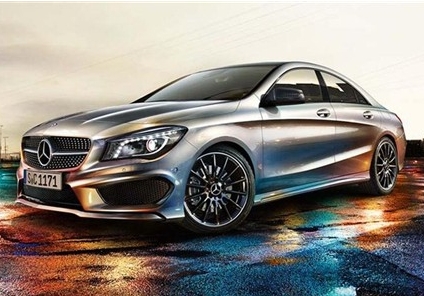 Mercedes-Benz MFA platform has now produced a new generation of reborn A-class and a new generation of B-class, then there will be more heavy models were born, it is the MFA platform has so far the most eclectic - Mercedes-Benz CLA four-door coupe . Recently, the official map of CLA 45 AMG, a high-performance model of the CLA series, was unveiled by overseas media. This set of official maps is likely to appear on the Mercedes-Benz official website in the near future, and the CLA 45 AMG will also be released immediately following the CLA next year.

The official image of the Mercedes-Benz CLA has been exposed on the Internet in the near future and is expected to be a CLA version of the AMG Sports Kit. According to previous news, the regular version of the CLA will be the first to be launched at the 2013 Detroit auto show, and the high-performance AMG version will be postponed.

Compared to the Mercedes-Benz spy photos released recently by Mercedes-Benz, the official version of the CLA, the models in this exposure map should be AMG suite versions with more exaggerated design. Unlike the ordinary version, the front bumpers have larger front and rear bumpers. Air inlets, metal grid grilles, rim styles, and more.

The Mercedes-Benz CLA is based on the same MFA platform as the new A-Class. The wheelbase is 2699mm, and a multi-link rear suspension is adopted. The exterior design retains the design elements of the previous CSC concept car and tightens the waist towards the rear of the car. The line is very eye-catching, echoing the streamline of the roof, and the overall design is full of sportiness.

The interior design of the Mercedes-Benz CLA has also been rejuvenated, with the AMG kit highlighting the sporty style and adopting a good-enveloping sports seat while offering a choice of yellow stitching styles. The center console also added some highlights. The design of the three-spoke steering wheel, the cross-shaped air-conditioning outlet and the barrel-type instrument panel are full of sports atmosphere.

The high-performance CLA45 AMG is equipped with a high-power version of the 2.0T engine, with a maximum output of 354 hp (260 kW) and a peak torque of 450 NÂ·m. The transmission section is matched with a 7-speed DCT dual-clutch gearbox. In addition to the standard four-wheel drive system in some models, the ordinary version can also provide optional.